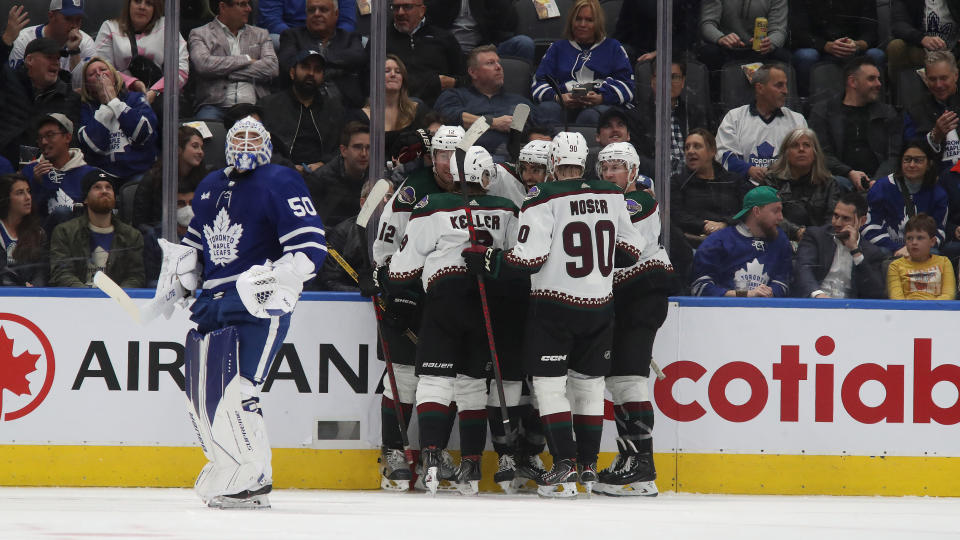 There are tough ways to lose hockey games, and then there’s whatever just happened to the Toronto Maple Leafs.

Monday’s game against the Arizona Coyotes had a wild finish to say the least, and was a game sure to go down in Leafs lore as one of their finest duds.

Despite sleepwalking their way to a 2-0 deficit to the lowly Coyotes through two and a half periods, the Maple Leafs found their legs late, notching a pair of goals from William Nylander and Mitch Marner to tie the game.

That’s when all hell broke loose and things began to go haywire for the Buds.

A brutal interference penalty by Calle Jarnkrok kicked off the chaos, as the Maple Leafs winger was sent to the box with just 2:05 remaining in the game.

From there, while on the penalty kill, the Maple Leafs did what they do best — collapse with the stakes at their highest. Justin Holl was the culprit in this instance, with what can only be described as one of the most eye-poppingly brutal giveaways you may ever see, providing Arizona a late 3-2 cushion.

Down and out, fans voiced their displeasure with raucous boos, until once again, the absolute tomfoolery that is the Maple Leafs struck again. With just 39 seconds left in the game, Alex Kerfoot managed to tie things up just 54 seconds later. Or so viewers thought.

As it turned out, an improbable hand pass call on Morgan Rielly would wipe out the Kerfoot tally and seal the Maple Leafs’ fate. The Coyotes would add an empty net goal to secure the improbable victory as dramatic underdogs, while keeping their point streak in Toronto, spanning 20 years, alive.

The call — which some Leafs fans argued was incorrect — along with the abhorrent result, left Maple Leafs Twitter in an all-too-familiar state of distress and despair that only the most jaded of fan bases can eloquently express.

Maple Leafs head coach Sheldon Keefe was none too pleased with the result, and wasn’t pulling any punches during his postgame press conference.

Following the loss, the Maple Leafs own a middling 2-2-0 record on the season. Perhaps far more disheartening is their two losses have come against the 31st- and 32nd-ranked teams from last season in the Coyotes and Montreal Canadiens.

Canada coach John Herdman is disputing his Croatian counterpart’s account of why there was no handshake after their World Cup game.

Herdman had antagonized the Croatian camp with a heated postgame message to his players after Canada’s opening 1-0 loss to Belgium at the soccer showcase. Asked in a pitch-side interview what he had said in a postgame huddle to his players, Herdman replied: “I told them they belong here and we’re going to go and eff – Croatia. That’s as simple as it gets.”

That prompted a stern lecture from Croatia coach Zlatko Dalic on the need for respect. And after Croatia beat the Canadians 4-1 Sunday, Dalic was asked if he had a chance to shake hands with Herdman following the final whistle.

“I did not see the other head coach after the match,” he said through an interpreter. “When I lose I always congratulate the winner. He was not there and that’s his way of doing things. He’s obviously mad. He is a good coach. He is a high-quality professional. But it will take some time for him to learn some things.”

Herdman, whose postgame news conference preceded Dalic’s on Sunday, disputed that account Wednesday when asked about it.

“When I turned round, [Dalic] was already off down the touchline, which is his right to do. He’s celebrating. He’s just beaten Canada. It was a big celebration for him. He was off and I couldn’t get to shake his hand. I went into the field, shook the ref’s hand, shook players’ hands. And didn’t get to see him.

“That moment’s gone. We’re into process now – team huddle, see your fans, flash interviews, calm yourself down so you don’t say anything and move on.”