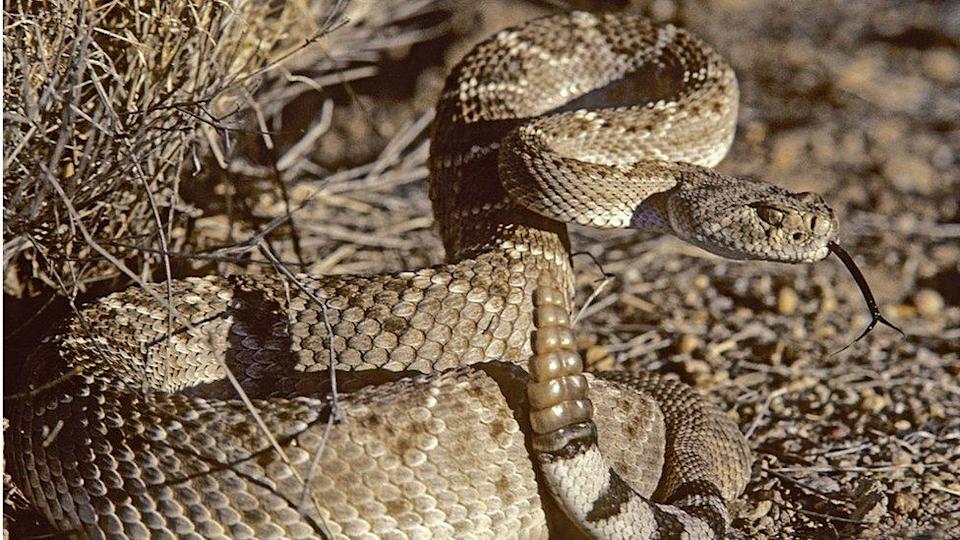 Rattlesnakes have evolved a clever method of convincing humans that danger is closer than they think, say scientists.

The sounds of their shaking tail get louder as a person approaches, but then suddenly switches to a much higher frequency.

In tests, the rapid change in sound made participants believe the snake was much nearer than it was in reality.

The researchers say the trait evolved to help snakes avoid being trampled on.

The sibilant sound of the rattlesnake’s tail has long been a movie cliché.

The tell tale rattle is made by the rapid shaking together of hard rings of keratin at the tip of the reptiles’ tails.

Keratin is same protein that makes up our fingernails and hair.

The key to the noise is the snake’s ability to shake its tail muscles up to 90 times a second.

This vigorous shaking is used to warn other animals and humans of their presence.

Despite this, rattlesnakes are still responsible for the majority of the 8,000 or so bites inflicted on people in the US every year.

Researchers have known for decades that the rattling can change in frequency but there’s been little research about the significance of the shift in sound.

In this study, scientists experimented by moving a human-like torso closer to a western diamondback rattlesnake and recording the response.

As the object got closer to the snake, the rattles increased in frequency up to around 40Hz. This was followed by a sudden leap in sound into a higher frequency range between 60-100Hz.

To figure out what the sudden change meant, the researchers carried out further work with human participants and a virtual snake.

The increasing rattling rate was perceived by participants as increasing loudness as they moved closer.

The scientists found that when the sudden change in frequency occurred at a distance of 4 metres, the people in the test believed it was far closer, around one metre away.

The authors believe the switch in sound is not just a simple warning, but an intricate, interspecies communication signal.

“The sudden switch to the high-frequency mode acts as a smart signal fooling the listener about its actual distance to the sound source,” says senior author Boris Chagnaud from Karl-Franzens-University in Graz, Austria.

“The misinterpretation of distance by the listener creates a distance safety margin.”

The authors believe that the snakes behaviour takes advantage of the human auditory system, which has evolved to interpret an increase in loudness as something that is moving faster and getting closer

“Evolution is a random process, and what we might interpret from today’s perspective as elegant design is in fact the outcome of thousands of trials of snakes encountering large mammals,” said Dr Chagnaud.

“The snake rattling co-evolved with mammalian auditory perception by trial and error, leaving those snakes that were best able to avoid being stepped on.”

The study has been published in the journal Current Biology.

TORONTO —
Dark energy, a mysterious force believed to be causing the universe to expand at an accelerated rate, may have been detected by scientists for the first time.

In a new study, published Wednesday in the journal Physical Review D, the authors suggest certain unexplained results from an experiment designed to detect dark matter could have been caused by dark energy.

“Despite both components being invisible, we know a lot more about dark matter, since its existence was suggested as early as the 1920s, while dark energy wasn’t discovered until 1998,” Sunny Vagnozzi, of the University of Cambridge’s Kavli Institute for Cosmology, said in a story posted by the university. “Large-scale experiments like XENON1T have been designed to directly detect dark matter, by searching for signs of dark matter ‘hitting’ ordinary matter, but dark energy is even more elusive.”

Nearly everything we can see and interact with, from bacteria to entire galaxies, is considered ordinary matter and energy, and makes up about five per cent of our universe, according to scientists. The rest is made up of dark matter (27 per cent), an invisible attractive force that holds the cosmos together, and dark energy (68 per cent), a repulsive force considered to be responsible for the accelerating expansion of the universe.

The XENON research project is a collaboration of 160 scientists from around the world who have come together to perform a series of experiments aimed at detecting dark matter particles. These experiments involve the use of ultra-pure liquid xenon, a colourless, dense, odourless noble gas found in trace amounts in Earth’s atmosphere.

Experiments are performed at the Gran Sasso National Laboratory, the largest underground laboratory in the world, located approximately 1.4 kilometres beneath the Gran Sasso mountains in central Italy, about 120 kilometres northeast of Rome.

The XENON1T experiment was the latest phase of the project. About a year ago, it detected an unexpected signal, or excess, over the expected background profile.

“These sorts of excesses are often flukes, but once in a while they can also lead to fundamental discoveries,” Luca Visinelli, researcher at Frascati National Laboratories in Italy, said. “We explored a model in which this signal could be attributable to dark energy, rather than the dark matter the experiment was originally devised to detect.”

The researchers created a physical model that used a type of screening mechanism known as chameleon screening to show that dark energy particles produced in the Sun’s strong magnetic fields could explain the XENON1T signal.

“It was really surprising that this excess could in principle have been caused by dark energy rather than dark matter,” Vagnozzi said. “When things click together like that, it’s really special.”

A discovery such as this would mean that experiments designed to detect dark matter, including those performed during the XENON project, could also be used to detect dark energy. But further research is required to confirm these findings.

“We first need to know that this wasn’t simply a fluke,” Visinelli said. “If XENON1T actually saw something, you’d expect to see a similar excess again in future experiments, but this time with a much stronger signal.”

SpaceX’s all-civilian Inspiration4 crew spent their first day in orbit conducting scientific research and talking to children at a pediatric cancer hospital, after blasting off on their pioneering mission from Cape Canaveral the night before.

St Jude tweeted its patients got to speak with the four American space tourists, “asking the questions we all want to know like ‘are there cows on the Moon?'”

Billionaire Jared Isaacman, who chartered the flight, is trying to raise $200 million for the research facility.

Inspiration4 is the first orbital spaceflight with only private citizens aboard.

Earlier, Elon Musk’s company tweeted that the four were “healthy” and “happy,” had completed their first round of scientific research, and enjoyed a couple of meals.

Musk himself tweeted that he had personally spoken with the crew and “all is well.”

By now, they should have also been able to gaze out from the Dragon ship’s cupola—the largest space window ever built, which has been fitted onto the vessel for the first time in place of its usual docking mechanism.

Most humans in space

The Inspiration4 mission also brings the total number of humans currently in space to 14—a new record. In 2009, there were 13 people on the International Space Station (ISS).

There are currently seven people aboard the ISS, including two Russian cosmonauts, and three Chinese astronauts on spaceship Shenzhou-12, which is bound home after its crew spent 90 days at the Tiangong space station.

That is deeper in space than the ISS, which orbits at 420 kilometers (260 miles), and the furthest any humans have ventured since a 2009 maintenance mission for the Hubble telescope.

Their high speed means they are experiencing time slightly slower than people on the surface, because of a phenomenon called “relative velocity time dilation.”

Apart from fundraising for charity, the mission aims to study the biological effects of deep space on the astronauts’ bodies.

“Missions like Inspiration4 help advance spaceflight to enable ultimately anyone to go to orbit & beyond,” added Musk in a tweet.

The space adventure bookends a summer marked by the battle of the billionaires Richard Branson and Jeff Bezos to reach the final frontier.

But these flights only offered a few minutes of weightlessness—rather than the three full days of orbit the Inspiration4 crew will experience, before splashing down off the coast of Florida on Saturday.

Three Chinese astronauts have returned to earth after a 90-day visit to an unfinished space station in the country’s first crewed mission since 2016.

In a small return capsule, the three men – Nie Haisheng, Liu Boming and Tang Hongbo – landed safely in the autonomous region of Inner Mongolia in the north of China at 1:34pm (05:34 GMT), state media reported.

The Shenzhou-12 mission was the first of four crewed missions planned for 2021-2022 as China assembles its first permanent space station. The process requires 11 missions, including the launches of the station’s three modules.

Construction kicked off in April with the launch of the Tianhe module, the future living quarters of the space station. Slightly larger than a city bus, Tianhe was where Nie, Liu and Tang have stayed since mid-June, marking China’s longest spaceflight mission.

The second crewed mission is planned for October, with the next batch of astronauts expected to stay on Tianhe for six months.

Ahead of that Shenzhou-13 mission, China will send an automated cargo spacecraft – Tianzhou-3 – to Tianhe carrying supplies needed by the next crew.

Tianzhou-3 will be launched in the near future, state media said recently.

Blocked by US law from working with NASA and by extension on the US-led International Space Station (ISS), China has spent the past 10 years developing technologies to construct its own space station.

China’s space station, expected to be completed by the end of 2022, will be the sole alternative to the 20-year-old ISS, which may be retired in 2024.