The braking is a key and risky step in the Mars exploration mission, which requires a high degree of accuracy. Only when the braking is performed with precise timing and duration can the probe successfully enter the planet’s orbit.

BEIJING, Feb. 11 — Precise braking near Mars has helped China’s probe Tianwen-1 successfully enter the orbit around the red planet on Wednesday, according to the country’s space scientists.

Yang Yuguang, a researcher with China Aerospace Science and Industry Corporation Limited, told the Science and Technology Daily that the braking is a key and risky step in the Mars exploration mission, which requires a high degree of accuracy.

When a probe is set to be captured by a planet’s gravity, the lower its orbit is, the more fuel the engine will save. But if Tianwen-1 brakes in an orbit too close to Mars, the probe may collide with the planet’s surface, given that minor errors may exist in its position measurement and control, Yang said.

If the braking time is too long, which results in excessive braking force, the probe will also face the risk of crashing, he said.

“Only when the braking is performed with precise timing and duration can the probe successfully enter the planet’s orbit,” said Pang Zhihao, an expert on deep space exploration technologies.

The deceleration of Tianwen-1 started with a 3000N engine ignited at 7:52 p.m. (Beijing time) on Wednesday. After about 15 minutes, the spacecraft, including an orbiter, a lander and a rover, had slowed enough to be captured by Mars’ gravity and entered an elliptical orbit around the red planet, with its closest distance from the Martian surface at about 400 km, according to the China National Space Administration.

Braking near Mars is different from braking near the moon, which China’s lunar probes have successfully achieved in previous lunar missions.

“In this case, the ground cannot monitor the spacecraft in real time. Instructions needed to be transmitted in advance and executed independently by the spacecraft,” Yang explained.

But slight deviations in the engine thrust and different variables concerning the spacecraft’s position, speed and attitude will all add to the complexity of achieving autonomous control, he said, adding that to ensure smooth autonomous control, Tianwen-1 is equipped with multiple sensors to allow for the accurate measurement of flight conditions.

With a weight of more than 5 tonnes, Tianwen-1 is among the world’s heaviest planetary probes. But scientists and engineers have managed to equip it with a relatively small engine so as to leave more weight and space for payloads. To make up for the small thrust, they extended the braking time to meet the braking requirements, Yang said.


Public health officials are cautioning residents to be wary of COVID-19 vaccine-related scams circulating throughout the Sarnia area.

Public health officials are cautioning residents to be wary of COVID-19 vaccine-related scams circulating throughout the Sarnia area.

Donna Schmidtmeyer, the health unit’s supervisor of health promotion, said they don’t charge fees to register or to get the vaccine.

“We will not ask you for any financial information whatsoever,” she said in a statement. “And, unless you have called (public health) to pre-register for the vaccine directly or signed up for the pre-registration using our online platform, no one should contact you and ask for any personal information.”

“If you’re unsure or your gut is telling you something is off, it probably is,” the health unit said.

People are encouraged to call Lambton public health at 519-383-8331 for accurate information.

The warning came amid the province releasing details Friday on the second phase of its vaccine distribution plan. A larger list of Ontarians – people between the ages of 60 and 79 and those with specific health conditions or who can’t work from home – will be included as officials aim to vaccinate nine-million residents between April and July.

More than 4,300 doses of the COVID-19 vaccine have been distributed to Sarnia-area residents – mainly into the arms of seniors and front-line health-care workers and caregivers – as of Wednesday. That figure is expected to climb as fixed-site clinics and mobile teams continue to distribute doses.

The number of COVID-19 cases also climbed Friday, with 122 considered active – nearly double from two days ago – while the overall caseload climbed 24 to 2,187.

A recent spread of the virus at Kettle and Stony Point has contributed to the sudden spike as the community had 26 active cases as of Thursday. Lambton public health’s top medical official said they’re working closely with the First Nation to trace close contacts and to set up a vaccine clinic there.

But a health unit spokesperson said Friday via email the situation is not officially classified as an outbreak. An emergency shelter, the jail, a retirement home and a long-term care facility in Sarnia as well as an unidentified local business and a retirement home in Lambton Shores were all dealing with official outbreaks. The number of cases connected to those facilities has held steady in recent days.

Eight Lambton Kent District and five St. Clair Catholic District school board schools had at least one case linked to them Friday, but they were all still open.

Ontario said Friday it will shift some health units to different colours in its colour-coded restriction system starting next week, but Lambton will stay in red.


Perseverance rover can travel 200 metres a day, but scientists need to conduct tests and safety checks before it ventures further.

NASA’s Mars rover Perseverance has taken its first, short drive on the surface of the red planet, two weeks after the robot science lab’s picture-perfect touchdown on the floor of an enormous crater, mission managers said on Friday.

The Perseverance rover first ventured from its landing position Thursday, two weeks after landing on the Red Planet to seek signs of past life.

Taking directions from mission managers at NASA’s Jet Propulsion Laboratory (JPL) near Los Angeles, the rover rolled four metres (13.1 feet) forward, turned about 150 degrees to its left and then drove backwards another 2.5 meters (8.2 feet) for a total of 6.5 metres (21.3 feet) during its half-hour test within Jezero Crater, site of an ancient, long-vanished lake bed and river delta on Mars.

The roundabout, back and forth drive lasted just 33 minutes and went so well that the six-wheeled rover was back on the move Friday.

Perseverance is capable of averaging 200 metres of driving a day.

So far, Perseverance and its hardware, including its main robot arm, appear to be operating flawlessly, according to Robert Hogg, deputy mission manager.

But JPL engineers still have additional equipment checks to run on the rover’s many instruments before they will be ready to send the robot on a more ambitious journey as part of its primary mission to search for traces of fossilised microbial life.

The team has yet to conduct post-landing tests of the rover’s sophisticated system to drill and collect rock samples for return to Earth via future Mars missions.

As soon as the system checks on Perseverance are complete, the rover will head for an ancient river delta to collect rocks for return to Earth a decade from now.

Scientists are debating whether to take the smoother route to get to the nearby delta or a possibly tougher way with intriguing remnants from that once-watery time three to four billion years ago.

The Perseverance rover ventured from its landing position Thursday, two weeks after landing on the Red Planet to seek signs of past life.

The roundabout, back-and-forth drive lasted 33 minutes and went so well that more driving was on tap Friday and Saturday for the six-wheeled rover.

“This is really the start of our journey here,” said Rich Rieber, the NASA engineer who plotted the route. “This is going to be like the Odyssey, adventures along the way, hopefully no Cyclops, and I’m sure there will be stories aplenty written about it.”

In its first drive, Perseverance went forward four metres, took a 150-degree left turn, then backed up 2.5 metres. During a news conference Friday, NASA’s Jet Propulsion Laboratory in Pasadena, Calif., shared photos of its tracks over and around small rocks.

“I don’t think I’ve ever been happier to see wheel tracks and I’ve seen a lot of them,” said engineer Anais Zarafian. “This is just a huge milestone for the mission.”

Flight controllers are still checking all of Perseverance’s systems. So far, everything is looking good. The rover’s two-metre robot arm, for instance, flexed its muscles for the first time Tuesday.

Before the car-size rover can head for an ancient river delta to collect rocks for eventual return to Earth, it must drop its so-called protective “belly pan” and release an experimental helicopter named Ingenuity.

As it turns out, Perseverance landed right on the edge of a potential helicopter landing strip — a nice, flat spot, according to Rieber. So the plan is to drive out of this landing strip, ditch the pan, then return for Ingenuity’s highly anticipated test flight. All this should be accomplished by late spring. 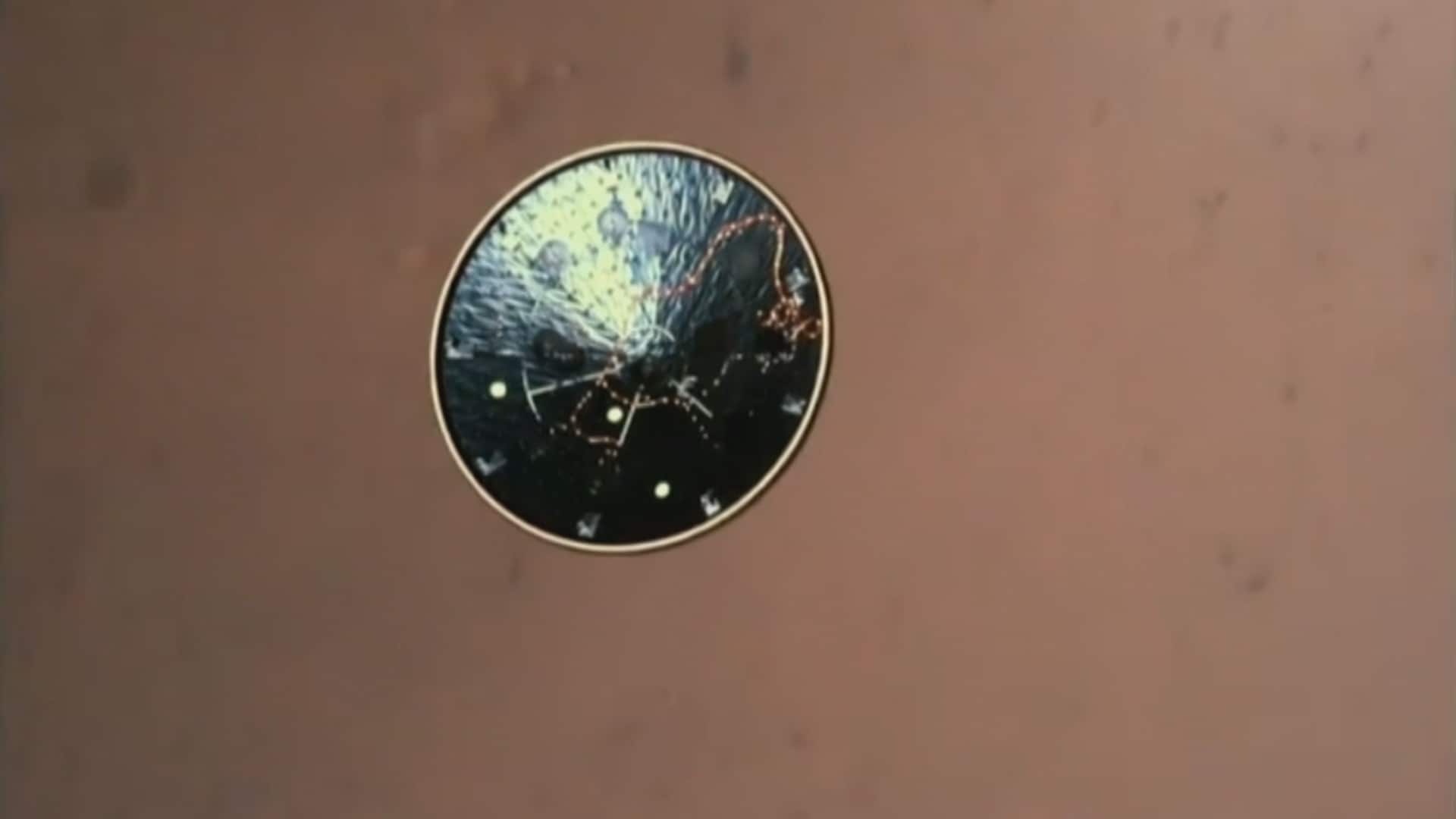 NASA’s Mars Perseverance rover safely landed on the surface of the Red Planet last week and, for the first time, the edge-of-your-seat descent was captured in footage from high-definition video cameras, which was released on Monday. The University of Alberta’s Chris Herd walks us through the incredible images. 9:02

Scientists are debating whether to take the smoother route to get to the nearby delta or a possibly tougher way with intriguing remnants from that once-watery time three billion to four billion years ago.

Perseverance — NASA’s biggest and most elaborate rover yet — became the ninth U.S. spacecraft to successfully land on Mars on Feb. 18. China hopes to land its smaller rover — currently orbiting the red planet — in another few months.

NASA scientists, meanwhile, announced Friday that they’ve named Perseverance’s touchdown site in honour of the late science fiction writer Octavia E. Butler, who grew up next door to JPL in Pasadena. She was one of the first Black people to receive mainstream attention for science fiction. Her works included Bloodchild and Other Stories and Parable of the Sower.