Pittsburgh Steelers head coach Mike Tomlin had already noted quarterback Ben Roethlisberger would be out this weekend against the Cleveland Browns as the team prepares for the playoffs. However, the list of Steelers that will be absent continues to grow. The team will also rest edge rusher T.J. Watt, defensive end Cam Heyward and center Maurkice Pouncey, according to Gerry Dulac of the Pittsburgh Post-Gazette.

Pittsburgh will start Mason Rudolph at quarterback. Rudolph and Browns edge rusher Myles Garrett were involved in a helmet-swinging incident that resulted in Garrett’s six-game suspension to end his 2019 season. Pouncey was the first on the scene to defend his quarterback. Pouncey, a former first-round pick out of Florida, is in his 11th season with the organization.

Rudolph has completed three of four passes thrown for nine yards this year.

Pittsburgh pulled off a necessary comeback last week against Indianapolis after dropping its previous three games. They secured the AFC North title as well as either the No. 2 or No. 3 seed in the AFC playoffs along with Buffalo. Kansas City remains the top seed and neither the Bills nor Steelers can take that from them in Week 17.

Cleveland, on the other hand, likely needs a victory to secure its first playoff trip since 2002. The Browns lost in the wild-card round to the Steelers that year. The franchise is currently dealing with a potential COVID-19 outbreak and could also be without some key players.

Pittsburgh trounced its rival, 38-7 when the teams met earlier this season. 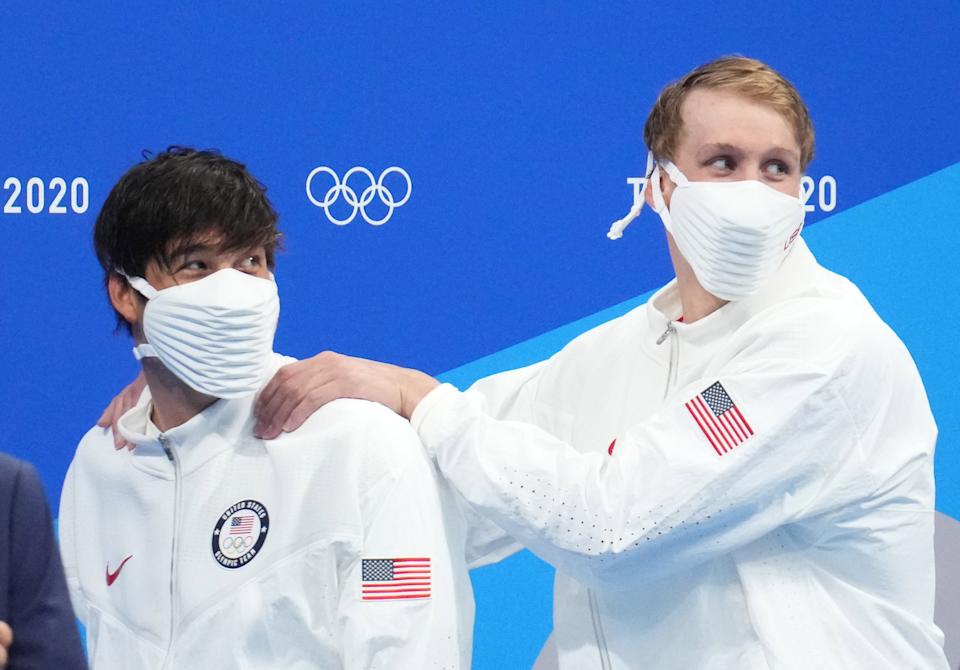 TOKYO — The International Olympic Committee on Sunday reminded athletes to keep wearing masks, especially at the one time when mask-wearing is completely unnecessary.

Dozens of athletes have now stepped up onto podiums here at the Olympics. They’ve draped medals around their necks, and listened to national anthems, with nobody within six feet of them. And in perhaps the proudest moment of their lives, with emotions washing over their faces, their families, forced to watch from home, haven’t been able to see those faces, because they’re covered by masks.

And when pictures circulated of a few swimmers posing on podiums with masks off?

A reporter asked IOC spokesman Mark Adams whether there’d been a relaxation of COVID-19 rules that require mask-wearing during medal ceremonies. “There is no relaxation,” Adams responded. “We would urge and ask everyone to obey the rules.”

But at the Tokyo Aquatics Center on Sunday, Olympic officials made a mockery of those rules. A non-story became a story because pictures circulated of swimmers arm in arm with masks off. But multiple athletes said after their competitions that they’d been directed to remove their masks for photos.

“Someone in the front was holding a sign that said, ‘Don’t wear a mask,’” said gold medal-winning American swimmer Chase Kalisz. “So, um, I can’t speak for what the proper protocol was, but he had a sign that said ‘mask off’ and ‘mask on.’”

Hours later, silver medal-winning Canadian diver Melissa Citrini-Beaulieu confirmed: “At one point they said to take off masks for a picture.”

And then, after the medal ceremonies, swimmers and divers alike paraded around the pool deck, stopping for more pictures, arm in arm with their fellow medalists, masks sometimes on, sometimes off. They hugged coaches. One German diver put her mask on the ground, then in a pocket.

There are all sorts of protocol violations here. On the first night of competition, U.S. soccer star Megan Rapinoe took her mask off for an interview with a dozen reporters in the post-match mixed zone. On Sunday, Tunisian swimmer Ahmed Hafnaoui lined up for an impromptu video interview against a wall outside the Aquatics Center after his improbable gold medal. Reporters surround him. A Tunisian Olympic committee official literally pulled Hafnaoui’s mask off, so cameras could see his beautiful face.

Protocols are enforced inconsistently. And yet, at the most prominent moment of virtually zero danger, with swimmers who’ll soon hug maskless separated by several feet, and with nobody in their immediate line of breath, the IOC and Tokyo organizers have decided that they must wear masks. At most of more than a dozen medal ceremonies tracked by Yahoo Sports thus far, including those in archery, judo, taekwondo and fencing, athletes have been masked up.

There is an argument that doing so models proper behavior, and perhaps that’s what Adams, the IOC spokesman, meant when he said that mask-wearing “sends a strong message.” But there is an obvious counterargument, that behavior modeling must be reasonable, or else the world will see it for what it is: all for show. Hygiene theater is prevalent at these Olympics. Medal ceremony mask-wearing is just another version.

The Vancouver Canucks placed Jake Virtanen on unconditional waivers Sunday for the purpose of buying out the final year of his contract.

Virtanen was placed on leave on May 1 after being accused in a lawsuit of sexually assaulting a women four years earlier. The organization said at the time that it “does not accept sexual misconduct of any kind and the claims as reported are being treated very seriously.”

The suit, filed in British Columbia, alleges Virtanen took the woman to a hotel in West Vancouver in September 2017 and assaulted her as she repeatedly said no and pleaded with him to stop.

The Canucks said at the time they had “engaged external expertise” to assist in an independent investigation. The NHL said then it would not comment until the investigation was complete.

The Canucks are on the hook for paying a third of Virtanen’s remaining $3 million base salary, while freeing up $2.5 million in cap space.

The Associated Press contributed to this report.

TOKYO — It was far from the performance Felix Auger-Aliassime was hoping for in his Olympic debut.

Playing on centre court of Tokyo’s Ariake Tennis Park on Sunday, Auger-Aliassime was eliminated in just under two hours by a player ranked 190th in the world who was not even scheduled to compete.

Australian Max Purcell, replacing the injured Andy Murray, upset the 15th-ranked Canadian in straight sets 6-4, 7-6 (2) in the first round.

The 20-year-old Auger-Aliassime never got into any kind of rhythm, except for a three-game winning streak that saw him go from down 1-3 to up 4-3 in the second set.

The Montrealer’s performance otherwise did not live up to expectations.

“It’s difficult to explain,” said the ninth-seeded Auger-Aliassime a few minutes after the loss. “You have to give credit to Max for playing such a good match. Even if he’s more of a doubles player, he’s dangerous, he serves well.

“Despite everything, I still had chances to do better in this match. I had a very bad service game in the first set, which cost me. After that, I did not find ways to get back into the match. A little in the second set, but it was not enough.”

Purcell broke the Canadian to take a 4-3 lead in the first set and won all four points in the next game to go up 5-3.

“I played with confidence,” said Purcell. “I just had two great tournaments in singles. I won a Challenger just last week.

“I need to make the most every time I get in. I went out there thinking I could win, and I think I had just as much to lose as Felix in my mind.”

The Australian earned another break early in the second set to take a 3-1 lead. Auger-Aliassime then strung together his best tennis of the encounter, winning three games in a row to give renewed hope to his team gathered around the court.

But it was short-lived. The two players exchanged serves until the tiebreaker, where Auger-Aliassime fell flat.

“You always have to try to find solutions, to adapt,” said the Canadian. “It’s difficult, we don’t always play our best tennis. That was the case today.

“My first service game has been good. There was no reason (to struggle today). In training (Saturday), I served well. (Sunday,) I didn’t have a lot of good first serves, I couldn’t find the right pace.

“In the second set I started to serve better, but it was almost too late. He had gained confidence, he was leading the game and I was going through it. I tried to find solutions, but it didn’t work out.”

Auger-Aliassime was supposed to face Murray, but the two-time defending Olympic champion withdrew a few hours before his clash with the Quebecer.

Murray, 104th in the world, suffered a quadriceps injury in his right leg. He is still lined up to play the doubles portion of the tournament with teammate Joe Salisbury.

“It’s not easy for anybody, adjusting at the last second,” said Frank Dancevic, Auger-Aliassime’s coach. “You think you’re going to play one guy and somebody else comes, a different game style than Andy. So it was just a little bit of mental adjustment.”

Auger-Aliassime now turns his attention to mixed doubles, which kicks off later this week, with teammate Gabriela Dabrowski of Ottawa.

“It doesn’t change that much for me. Whether I play against Andy or Max, I had to play a good game” said Auger-Aliassime. “I would have had to find solutions.

“It for sure hurts. Coming here, I had the possibility of having a better tournament. Leaving so early is a bit unexpected and I am very disappointed. I have to accept it and I will try to bounce back in the mixed doubles.”

This report by The Canadian Press was first published July 25, 2021.

Putnam: The character of our politics – SC Times