While it may be relatively easy to spot meteorite remains in Antarctica due to the continent’s unique geographical features, looking for them manually is often challenging. This is why a team of researchers from the Delft University of Technology in The Netherlands created a type of “treasure map” that uses artificial intelligence to identify zones where meteorites can be found with high probability.

Veronica Tollenaar, who led the study, said: “Through our analyses, we learned that satellite observations of temperature, ice flow rate, surface cover and geometry are good predictors of the location of meteorite-rich areas.

“We expect the ‘treasure map’ to be 80 percent accurate.”

Based on the study, published in Science Advances, the researchers have predicted that there are more than 300,000 meteorites hidden on the Antarctic landscape.

A special feature of the study is that this ‘treasure map’ was created using artificial intelligence.

The researchers combined different types of observations in a machine learning algorithm and were thus able to identify zones where meteorites can be found with high probability.

Stef Lhermitte, who was involved in the study along with assistant professor David Tax from TU Delft said: “We found several never-visited meteorite-rich areas that are relatively close to research stations.”

The machine-learning algorithm overlays the different satellite observations, and, more importantly, captures the interplay between these observations, which is essential in predicting whether there are meteorites or not.

According to Veronica Tollenaar: “Antarctica is very remote and many areas have never been visited.

One of the regions in Antarctica that are known to contain meteorites is in the continent’s blue ice areas.

Scientists know this because the contrasting blue ice makes it easy to detect and collect meteorites during Antarctic field work missions.

The resulting ‘treasure map’ is accessible on the website www.wheretocatchafallingstar.science, where anyone can search the Antarctic continent and explore locations with a high potential to find meteorites.

According to Harry Zekollari, who supervised the research at TU Delft and ULB and is currently a postdoctoral scientist at ETH Zurich, logistics can pose a major problem when it comes to meteorite expeditions.

He said: “These missions are logistically and financially expensive, and we think our newly developed map will help to increase the success of future missions.”

New research suggests that Jupiter contains the remnants of numerous planetoids that it consumed as it grew in the early solar system.

Jupiter is the largest and most massive planet in our solar system, tipping the cosmic scales at over 317 times the mass of Earth. Most of its bulk is made up of just two elements — hydrogen and helium. However, a small percentage of the planet is composed of heavier elements, all of which astronomers group together into the category of metals.

This artist impression shows dark scars in Jupiter’s clouds due to shards of Comet Shoemaker-Levy 9 impacting the planet in 1994. Credit: ESO/M. Kornmesser/NASA/ESA

SEE ALSO: It’s a bird. It’s a plane. It’s the best products for stargazing this summer

This same distinction is used in stellar astronomy, where a star is described as having a specific metallicity, which refers to the amount of stuff in the star that is not hydrogen or helium.

As Juno orbits around Jupiter, it makes periodic close passes over the planet’s cloud-tops. During each of these passes, the spacecraft keeps careful record of the gravitational pull it experiences due to the material underneath it. This gives researchers an idea of exactly how much stuff is under Jupiter’s clouds in different regions of the planet.

Using this data, an international team led by Yamila Miguel, from the Dutch national expertise institute for scientific space research (SRON) and the Leiden Observatory, constructed computer models of Jupiter’s interior to account for what Juno recorded.

Their study revealed some unexpected details about the massive gas giant. 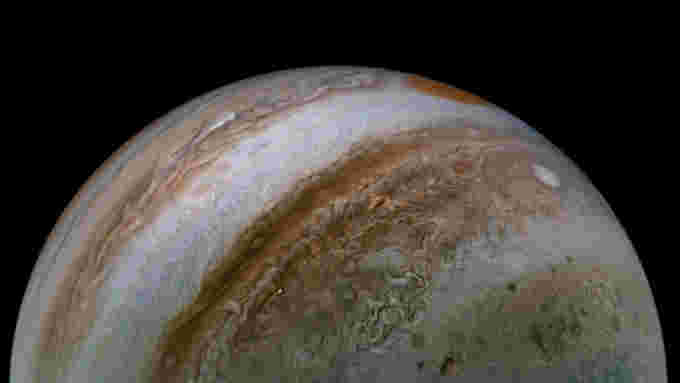 This view of Jupiter’s cloud tops was taken by NASA’s Juno spacecraft as it made its 31st close-pass around the planet. Credits: NASA/JPL-Caltech/SwRI/MSSS, processed by citizen scientist Tanya Oleksuik (CC BY-NC-SA 3.0)

DON’T MISS: Overlapping meteor showers put on a show in the night sky this summer

Firstly, the distribution of the metals within Jupiter is not uniform. Instead, they are more concentrated the deeper into the planet you go. While heavier elements do tend to sink towards a planet’s core, this discovery is unusual because it was assumed that the motions of Jupiter’s atmosphere would cause the metals to be more evenly distributed.

“Earlier we thought that Jupiter has convection, like boiling water, making it completely mixed,” Miguel said in a SRON press release. “But our finding shows differently.”

Secondly, the total amount of Jupiter’s metal content is somewhere between 3 to 9 per cent of the entire planet, or roughly equivalent to 11-30 times the mass of Earth. That’s a lot of heavy elements for the planet to consume in a relatively short time.

“There are two mechanisms for a gas giant like Jupiter to acquire metals during its formation: through the accretion of small pebbles or larger planetesimals,” Migel said.

Planetesimals (aka planetoids) are solid chunks of rock and/or ice that formed in the early solar system. This includes asteroids and comets larger than 1 kilometre across, but smaller than 100 km. Anything larger would be an ’embryonic planet’ or ‘protoplanet’, while objects smaller than 1 km would be considered ‘pebbles’.

According to Migel, once a ‘baby’ planet grows massive enough, its gravity tends to snag the smaller pebbles and fling them out of the way. Thus, by the time Jupiter accumulated enough mass to develop its hydrogen-helium atmosphere, its own gravity would have blocked it from consuming these tiny objects.

However, as the researchers note in the paper, their results
indicate that Jupiter continued to accumulate heavy elements, in large amounts, while its hydrogen-helium envelope was still growing. So, a significant amount of the planet’s metals had to come from larger objects.

“Planetesimals are too big to be blocked, so they must have played a role,” Migel said.

So, how many planetesimals has Jupiter eaten?

If we use some typical asteroid masses from NASA, to account for up to 30 Earth-masses worth of metals, Jupiter would have had to gobble up somewhere between a few hundred million larger ones to billions of smaller ones!

Five planets are lining up in the sky in June and will peak tonight. Here's how to see it. – CBS News

Five planets are moving into a rare alignment, which will be visible from Earth this week. Mercury, Venus, Mars, Jupiter and Saturn are lining up — in that order — for the first time since December 2004. On Friday, June 24, the phenomenon will be the most visible to stargazers.

While it is common to see a conjunction of three planets close together, seeing five is rare, according to Sky & Telescope. The planets are lining up in their natural order from the Sun, which is also remarkable, says the science magazine published by American Astronomical Society.

The five so-called “naked-eye” planets were visible beginning on June 3 and 4, and the lineup could be seen with binoculars — but only for about half an hour, before Mercury was lost in the glare of the sun.

But on June 24, viewing will be optimal. Even if the distance between Mercury and Saturn increases, it’s getting easier to spot Mercury, so it is getting progressively easier to see all five planets, Diana Hannikainen, observing editor of Sky & Telescope, told CBS News via email.

Hannikainen said the sky on the morning of the 24th “will present a delightful sight” because the waning crescent moon will also join the procession between Venus and Mars.

Four of the naked-eye planets have been lining up in the for the past few months, according to NASA. But over the next few months, Saturn, Mars, Jupiter and Venus will spread out. By September, Venus and Saturn will no longer be visible to most observers.

Another astronomical phenomenon will be visible in June: the M13 globular star cluster, a tightly packed spherical collection of stars. The M13, also known as the Hercules Cluster, contains thousands of stars, which are thought to be around 12 billion years old — almost the age of the universe itself, NASA says.

Caitlin O’Kane is a digital content producer covering trending stories for CBS News and its good news brand, The Uplift.

No special equipment is needed to spot the stellar phenomena, with all being easily bright enough to be visible with the naked eye.

Arkos said they’ll even be visible in more populated city areas, although he suggested getting away from light pollution for the best effect.

“Just before the sun comes up is when you have your best chance to catch all of these planets,” Arkos added. “The trickiest one is going to be Mercury because it’s very close to the sun in the sky so you have to wait literally until the sun is just about to rise to catch a glimpse of Mercury in the glow of the sun.”

The event peaks ahead of sunrise on Friday, meaning those wanting to catch a glimpse should set an alarm for 4 a.m. and be in position by 4:30 a.m. looking eastward.

A clear view of the sky to the horizon from the northeast to southeast is key.

With little cloud in the forecast, stargazers will have the opportunity to see variations of the alignment with the moon until June 27th.

The planetary alignment will be visible in varying degrees until July 6 when Mercury will disappear in the light of the sun.

“You’ll see them shifting as time goes on because of course they move at different rates in the sky so they won’t maintain that particular configuration exactly, it’ll change over time,” Arkos said.

Following this planetary alignment event, the attention of Arkos and his fellow astronomers turns to the James Webb deep space telescope, due to release its first official images on July 12.

Catch five naked-eye planets lined up in the morning sky on Friday, June 24. The last time this rare, ordered planetary alignment occurred was way back in 2004. And it won’t happen again for nearly 20 years [read more: https://t.co/M8FQepSJKF] pic.twitter.com/68BJzecyqf

Local news. Delivered. Free. Subscribe to our daily news wrap and get our top local stories delivered to your email inbox every evening