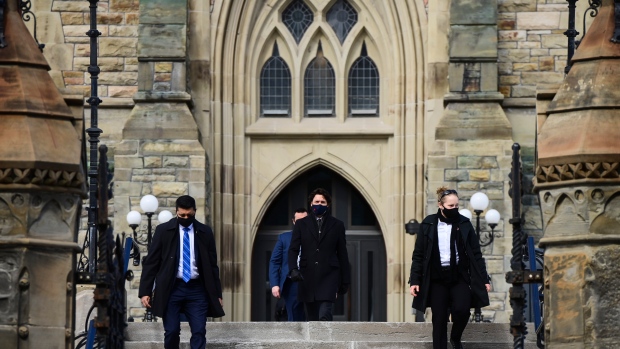 OTTAWA —
Sidestepping commenting on the revelations in Oprah Winfrey’s recent interview with Prince Harry and Meghan against other members of the Royal Family, Prime Minister Justin Trudeau said the solution is not to dismantle the monarchy.

Asked how he reconciles his support for the monarchy with his pledge to address the legacy of colonialism in Canada, Trudeau said the way forward is to root out the systemic racism that pervades institutions—including Parliament—rather than abolishing them.

“The answer… is not to suddenly toss out all the institutions and start over. The answer is to look very carefully at those systems and listen to Canadians who face discrimination every single day and whenever they interact with those institutions, to understand the barrier, the inequities and inequalities that exist within our institutions that need to be addressed, that many of us don’t see because we don’t live them,” the prime minister said. “That’s what fighting systemic discrimination is all about.”

In the interview that aired in Canada on Sunday, several bombshell claims were made, including that a member of the Royal Family was concerned about how dark the Duke and Duchess of Sussex’s son’s skin might be.

For many Black and racialized viewers, the two-hour broadcast was a high-profile example of the impacts of systemic racism.

Shortly after Trudeau’s remarks, Buckingham Palace issued a statement on behalf of the Queen saying in part that “the issues raised, particularly that of race, are concerning. While some recollections may vary, they are taken very seriously and will be addressed.”

Trudeau said that while he wishes all members of the Royal Family “the very best,” his focus is on getting the country through the COVID-19 pandemic and not starting a conversation about reinventing Canada’s system of government.

“I won’t comment on what’s going on over in the U.K., but I will continue to endeavour to fight against racism and intolerance every single day in Canada,” Trudeau said. “If people want to later talk about constitutional change… that’s fine.”

Trudeau’s not the only world leader to demure from commenting on the interview directly, with New Zealand Prime Minister Jacinda Ardern saying that conversations about that country’s constitution are too significant to base on a TV interview.

NDP Leader Jagmeet Singh weighed in, saying Tuesday that he doesn’t see the benefit of the monarchy.

“Now even more so with concerns about racism in the institution that were raised,” Singh said.

If Canada was to embark down this road, Canadians should have a clear understanding of what the next steps would be, said former deputy prime minister John Manley in an interview with CTV News, noting that while a referendum would be an option it’s not constitutionally necessary.

“The process that would be required to change the role of the Crown in the Canadian constitution does involve all provinces approving it,” Manley said. “It’s not a simple task, and it would require a broad view among Canadians… that it was time to adopt a new a new method of choosing our head of state.”

Canada is still without a full-time governor general since the departure of Julie Payette more than a month ago. For now Supreme Court of Canada Chief Justice Richard Wagner is fulfilling the role of administrator on an interim basis until Trudeau recommends a new Queen’s representative in Canada.

President of the Queen’s Privy Council and Intergovernmental Affairs Minister Dominic LeBlanc said Tuesday that while he’d hoped he’d have more to say on the process to name Payette’s replacement weeks ago, the government is “getting closer.”

“One element that remains to be finalized I understand is concluding, so I hope very soon we’re in a position to talk about a potential process,” he said. “We recognize the importance of proceeding expeditiously because it’s an unusual circumstance.”

Trudeau says now is not the time to talk about scrapping the monarchy – CBC.ca