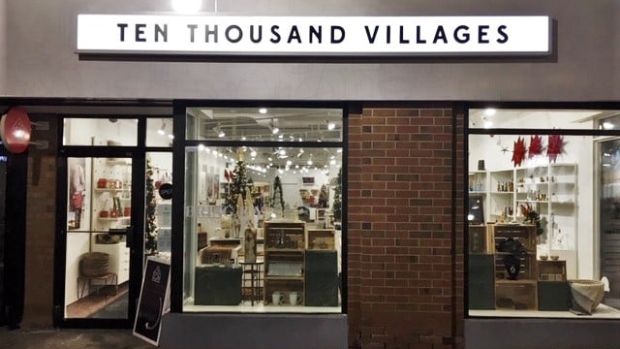 KITCHENER —
After 74 years in business, Ten Thousand Villages Canada has announced it will close its corporate operations, including its distribution centre in New Hamburg and its store in Waterloo.

“It is with the heaviest of hearts we announce the closure of the corporate operations of Ten Thousand Villages Canada, which includes the head office, distribution centre in New Hamburg,” a statement on the company’s website begins.

The non-profit social enterprise was started in 1946 by Edna Ruth Byler, a member of the Mennonite Central Committee, when she started selling wares from her trunk on behalf of Puerto Rican women.

The closures include all Ontario stores except for one each in Port Colborne and Cobourg.

“It’s of course selling fairly-traded handy crafts from around the world here in a Canadian market. It did very, very well for many years and for the last number of years, that model was very, very difficult.”

Operations in Waterloo Region will close on May 29 this year, alongside several other branches around the country and even the company’s online store.

“In this challenging retail environment, we recognize your commitment, support and dedication to the success of Ten Thousand Villages Canada,” the company says in a news release on its website.

“However, in spite of all our best efforts, we have been unable to achieve the level of sales that would continue to provide us with the ability to operate a sustainable business model.”

Under its business model, a total of eight stores across the country are owned and operated by different boards. Some of those stores will remain open.

Two years ago, the Mennonite Central Committee decided to close nine stores across the country, including one in Stratford and another in St. Jacobs.

A few stores will close earlier than May, with a date set for March 31, while others have not yet determined a date to close.

UN investigators said on Wednesday there are reasonable grounds to believe that Saudi Arabian Crown Prince Mohammed bin Salman was involved in a hack of Amazon CEO Jeff Bezos’ phone.

“UN human rights experts are gravely concerned by information they have received suggesting that, in contravention of fundamental international human rights standards, a WhatsApp account belonging to the Crown Prince of the Kingdom of Saudi Arabia in 2018 deployed digital spyware enabling surveillance of The Washington Post owner and Amazon CEO, Jeffery [sic] Bezos,” the UN investigators said in their statement released on Wednesday.

“The information we have received suggests the possible involvement of the Crown Prince in surveillance of Mr. Bezos, in an effort to influence, if not silence, The Washington Post’s reporting on Saudi Arabia,” special rapporteur David Kaye said in a statement.

Kaye and fellow special rapporteur Agnes Callamard are independent experts appointed by the UN to examine human rights violations and violations of freedom of expression.

The Guardian reported on Tuesday that a forensic investigation of Jeff Bezos’ phone revealed he had been hacked by the Crown Prince in 2018.

A number belonging to Crown Prince Mohammed is thought to have sent Bezos a WhatsApp message with a video file that contained malware that infiltrated the billionaire’s phone.

In their report, the UN investigators included a technical analysis of Bezos’ phone which suggested that he had been subject to “intrusive surveillance” from Saudi Arabia. That report linked Crown Prince Mohammed to the hack.

The investigators wrote: “Mr. Bezos was subjected to intrusive surveillance via hacking of his phone as a result of actions attributable to the WhatsApp account used by Crown Prince Mohammed bin Salman.”

The investigators also note in their statement that Crown Prince Mohammed sent Bezos messages in November 2018 and February 2019 containing “private and confidential information about Mr. Bezos’ personal life that was not available from public sources.

The New York Times earlier reported on Wednesday that the forensic analysis of the phone had been performed by business advisory firm FTI Consulting.

The technical analysis released on Wednesday pointed to Pegasus, invasive software from secretive Israeli security firm NSO Group. NSO Group is currently being sued by WhatsApp’s owner Facebook for compromising users’ accounts. The technical analysis confirmed the use of a malicious video file, but did not detail its contents.

In a statement to Business Insider NSO Group denied any involvement: “As we stated unequivocally in April 2019 to the same false assertion, our technology was not used in this instance. We know this because of how our software works and our technology cannot be used on US phone numbers. Our products are only used to investigate terror and serious crime,” a spokesman said.

In an additional statement published on its website NSO Group added it was “shocked and appalled” by the alleged hack. “If this story is true, then it deserves a full investigation by all bodies providing such services to assure that their systems have not been used in this abuse,” it said.

The Saudi government pushed back against The Guardian’s earlier report, calling the allegation “absurd” and calling for an investigation.

The alleged hack is the latest in a long-running saga involved Jeff Bezos, his phone communications, and Saudi Arabia.

After US tabloid the National Enquirer obtained and published texts and intimate pictures shared between Jeff Bezos and his girlfriend Lauren Sanchez last year, Bezos commissioned his private head of security Gavin de Becker to find out who was behind the leak.

In an extraordinary blog post in February 2019, Bezos pointed to links between American Media Inc (the National Enquirer’s parent company) and Crown Prince Mohammed. Bezos also pointed out he owns the Washington Post, the paper which employed murdered Saudi dissident Jamal Khashoggi. Khashoggi’s killing is widely believed to have been ordered by Crown Prince Mohammed, and the UN investigators described the alleged Bezos hack as relevant to the ongoing investigation into Khashoggi’s murder.

A month later de Becker wrote in the Daily Beast that his investigation had concluded with “high confidence” that the Saudis had gained access to Bezos’ phone.

In their statement the UN investigators called for a more thorough investigation. “The alleged hacking of Mr Bezos’s phone, and those of others, demands immediate investigation by US and other relevant authorities, including investigation of the continuous, multi-year, direct and personal involvement of the Crown Prince in efforts to target perceived opponents,” said Kaye.

This is a developing story… 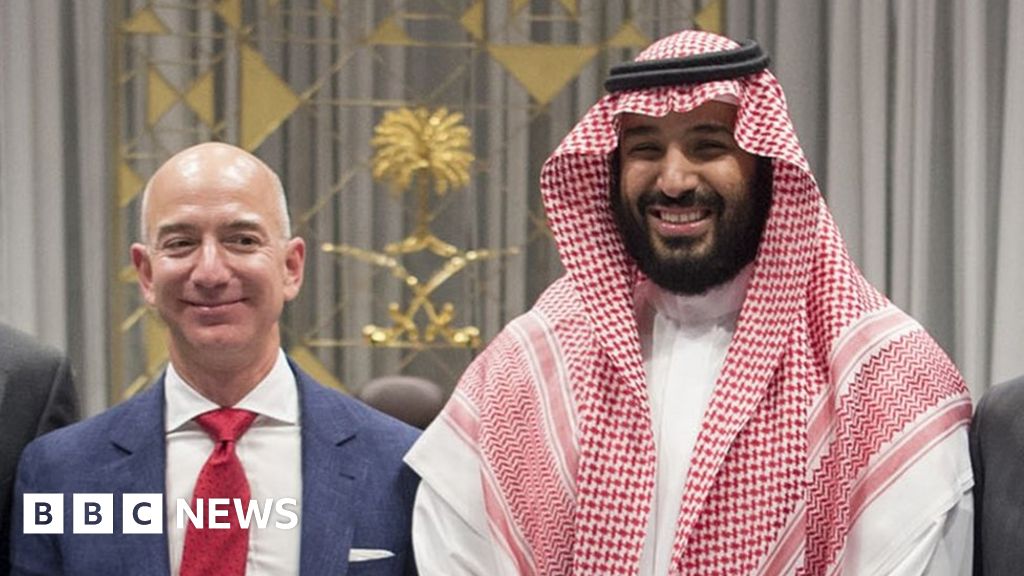 They said Mohammed bin Salman should also be investigated for “continuous, direct and personal efforts to target perceived opponents”.

A message from a phone number used by the prince has been implicated in a breach of Mr Bezos’s data.

The kingdom’s US embassy has called the story “absurd”.

Relations between Saudi Arabia and Mr Bezos – who also owns the Washington Post – worsened after Jamal Khashoggi, a prominent critic of the Saudi government and one of the newspaper’s staff, was murdered in the Saudi consulate in Istanbul.

Mr Bezos’ phone was hacked after he received a WhatsApp message in May 2018 that was sent from the crown prince’s personal account, according to the Guardian newspaper, which broke the story.

An investigation into the data breach reportedly found that the billionaire’s phone began secretly sharing huge amounts of data after he received the encrypted video file from the prince. 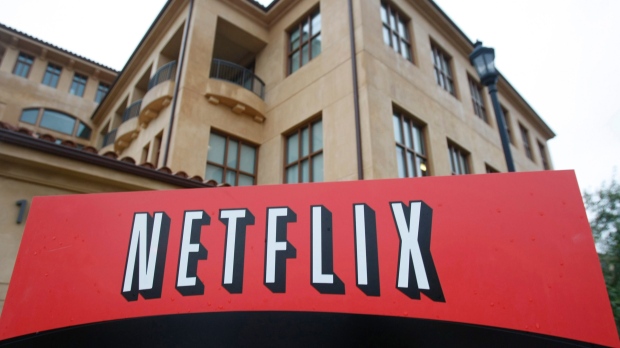 TORONTO – Netflix recruited more Canadian subscribers in the final months of last year as it responded to an onslaught of new competition from Apple TV Plus and Disney Plus with an array of buzzworthy TV series and Oscar-calibre movies.

The global streaming company attracted 125,000 paid sign-ups in Canada during the fourth quarter that ended Dec. 31, 2019, helped by popular TV series “The Witcher” and acclaimed films “Marriage Story” and “The Irishman.”

Yet, while the results were an improvement over the 96,000 Canadian subscribers who joined in the third quarter, the company’s subscriber growth was down from the 218,000 new members who joined during the last three months a year prior.

Part of that slowdown could be attributed to the arrival of both Apple and Disney which launched their hyped streaming services within days of each other. Disney Plus, in particular, left a solid impact on pop culture when its Star Wars spinoff “The Mandalorian” sparked an obsession with viewers over the so-called Baby Yoda character on social media.

Netflix says despite the widespread attention both new streaming platforms attracted, there was a “more muted impact from competitive launches” outside the U.S., including in Canada.

Reed Hastings, the company’s chief executive, downplayed the arrival of Apple and Disney, saying in a call with investors that before they showed up a formidable competitor for viewership already existed in global powerhouse YouTube.

Spencer Wang, the company’s vice-president of finance, suggested the notion of the streaming wars is overplayed by outsiders.

“I know it’s exciting for folks to talk about – you know the clash of the titans and all that kind of stuff – but really the big thing that’s going on is a transition from linear entertainment to streaming on demand entertainment, which is really, really big,” he said.

“It’s very similar to the transition the industry went through from broadcast to cable.”

The latest Canadian figures were outlined as part of a broader commitment to provide its investors with a more extensive quarterly report that fleshed out data on growth in key countries. More detailed breakdowns of its regional membership numbers and revenue cover four regions – Asia-Pacific; Latin America; Europe, the Middle East & Africa; and U.S. and Canada.

The North American region was the lowest membership growth area for the streaming company, which it attributed in its financial report to “recent price changes and to U.S. competitive launches.”

Canadian revenues were higher at US$241 million in the three months that ended Dec. 31, 2019, marking an increase from nearly $164.9 million in the same period a year earlier when the company was phasing in a price increase with users across the country.

A report released Tuesday by the Canadian Radio-television and Telecommunications Commission on the state of the country’s communications industry offered further insight into the popularity of Netflix in Canada.

The 2019 Communications Monitoring Report outlines that subscription-based video-on-demand services – which include Netflix, Crave and Quebec-based Club Illico – generated $2.5 billion of revenue for the entirety of 2018. Netflix was by far the largest chunk of those revenues, representing 65 per cent, while Amazon Prime Video came in a distant second with an eight-per cent share of total revenues.

– with files from The Associated Press

This report by The Canadian Press was first published Jan. 21, 2020.

Jean Charest, Jean Chrétien and other political throwbacks in the news – Maclean's