MONTREAL —
Soaring prices and shortage of single-family units have caused Montreal-area real estate sales to drop in the month of June.

The Quebec Professional Association of Real Estate Brokers (QPAREB) released its June sales statistics for the Montreal Metropolitan Area, and they show a seven per cent decrease in sales from June 2020 (4,619 units).

“Residential sales in the Montreal area fell significantly in June, mainly due to a historic shortage of single-family homes available for sale and a sharp increase in prices that also extended to the condominium segment,” said QPAREB market analysis department director Charles Brant.

Brant added that single-family homes in Montreal suburbs were central to the strong numbers in June 2020 after the first COVID-19 wave. This year, those sales have dropped as the supply dipped and prices soared. 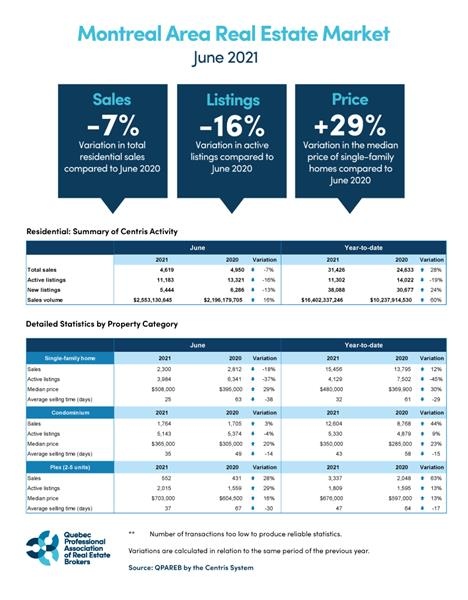 The QPAREB notes that the Greater Montreal Area real estate market remains hot and that most houses and condos are selling for above the asking price.

Sales on the Island of Montreal have increased 11 per cent driven mainly by condo sales, the QPAREB says, while sales decreased in all suburban areas.

The trend is explained by a decrease in supply of single-family homes (-37 per cent) and condos (-4 per cent), while plexes’ supply has increased by 29 per cent.

Plenty of room for house prices in Canada to rise as interest rates stay low – CBC.ca

Multiple Listing Service (MLS) sales fell 16.3 per cent in May adding to April’s 13 per cent decline to a seasonally-adjusted 6,853 units. On an unadjusted basis, sales fell 34 per cent.

While sales remained above levels observed just prior to the pandemic and above the same-month average from 2010-19, momentum is quickly weakening. This is not surprising with fixed mortgage rates well above four per cent and at a 10-year high, while variable rates are rapidly shifting higher. With home prices up 40 per cent during the pandemic, prospective buyers face a very different market, and many have quickly been priced out of ownership. High consumer price inflation is further amplifying affordability challenges for households.

Sales declines were observed in most regions of the province. Specifically, the real estate boards of Chilliwack (-25 per cent) and the Fraser Valley (-20 per cent), which covers Abbotsford-Mission and eastern communities of Metro Vancouver, including Surrey, led the drop in sales while the rest of Metro Vancouver fell 18 per cent. Vancouver Island fell 18 percent, but remained elevated, with more modest declines in the interior and northern markets. In contrast, retiree demand and migration from Alberta continues to support conditions outside Metro Vancouver.

Declining sales are contributing to a quick moderation in market conditions. Fewer sales and steady new listings lifted active listings in the province for a fifth straight month with inventory on the rise in most markets. Sales-to-active listings ratios remain in a range consistent with a sellers’ market, but the rapid decline suggests markets are nearly balanced, with the potential to move into a buyers’ market range.

At $980,324, the average price fell 4.7 per cent from April and marked the first sub-million-dollar reading since November. Consistent with sales, declines were deepest in Chilliwack (-4.3 per cent) and the Fraser Valley (-6.7 per cent), although average prices eroded in most real estate board areas.

After an impressive run where B.C. manufacturing sales increased for seven consecutive months, the streak came to an end in April as sales dipped 2.9 per cent from March to $5.8 billion. Both durable goods (down 1.6 per cent) and non-durable goods (down 4.5 per cent) posted weaker sales.

Over 2022’s first four months, total sales remained 10.1 per cent of last year’s pace with durables (up 6.7 per cent) and non-durables (up 15.1 per cent), considerably ahead of last year’s pace notwithstanding April’s dip in activity. Manufacturing sales activity dipped across the province in May. In Metro Vancouver, sales fell 1.5 per cent and were down 4.3 per cent in the rest of British Columbia.

Prolegis is a cloud-based real estate conveyancing solution made for real estate lawyers. It integrates with a real estate practice, providing tools and information to help each user enhance their performance, customer engagement, and work-life balance.

Prolegis is designed to help users save time, with all the capabilities and key third-party integrations needed to convey a real estate transaction. The solution provides user flexibility to configure and organize work, communicate with clients, and manage the real estate transaction end-to-end from a single solution at any time. It offers a library of document and workflow management tools, community databases, stakeholder portals, and real-time support.

‘Simplicity is incredibly pleased and excited to offer Ontario real estate lawyers and conveyancers a fresh new choice in a legal software provider. Collaborating with our valued customers and a network of trusted stakeholders, we are building a better, brighter future for real estate legal professionals and Canadian homebuyers,” said Neil N. Babiy, co-founder and chief executive officer of Simplicity Global Solutions Ltd. “At Simplicity, we envision a future where innovative technology is at the forefront of enhancing the customer experience in the real estate ecosystem. We are committed to helping advance technology utilization and adoption within the real estate sector by providing solutions that are user-friendly, easy to implement, and economical to acquire and operate.”

Ontario real estate lawyers and conveyancers can now book a demo and learn more about the tool here.

U.S. real estate giant Blackstone says it will not target single-family homes in its Canadian expansion – The Globe and Mail 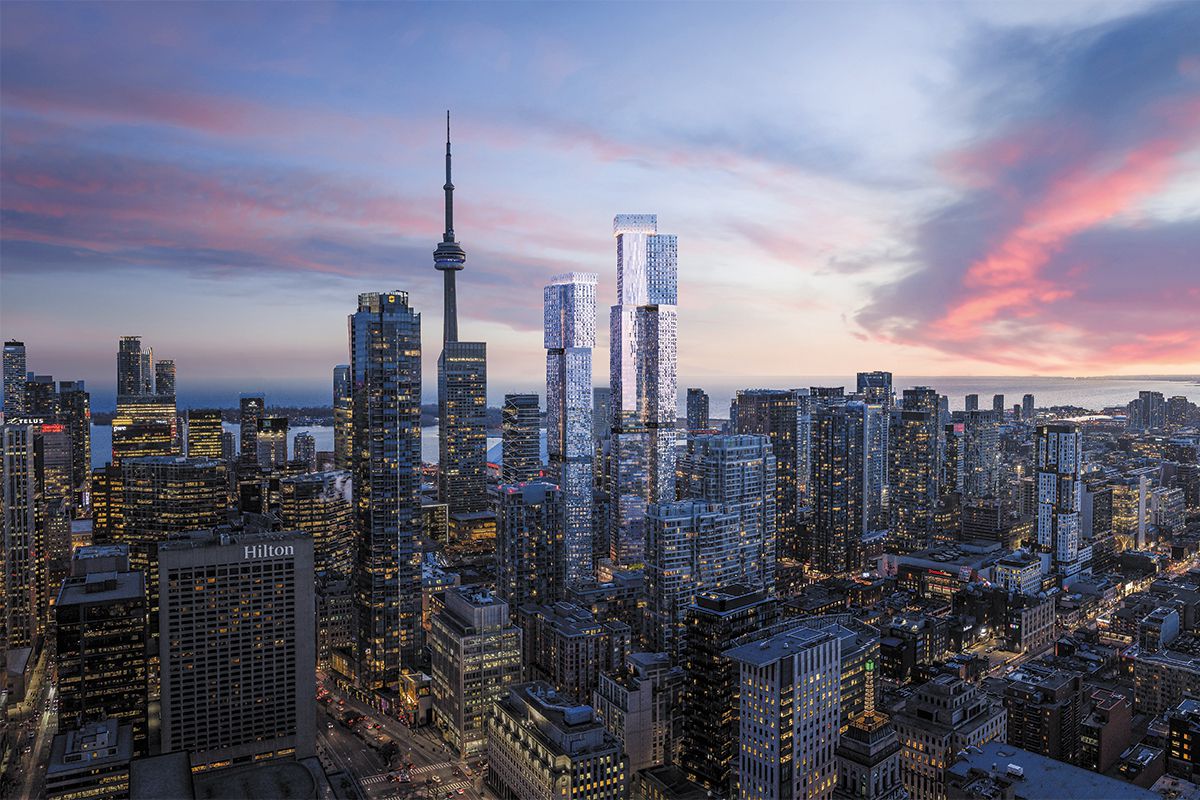 Blackstone Inc. BX-N said Monday it has no interest in investing in single-family homes in Canada, laying to rest speculation the giant global asset manager would scoop up hundreds of Canadian houses and turn them into rental properties.

After Blackstone announced plans in May to establish a Canadian office in Toronto, rumours abounded that the private equity firm would unleash its firepower, gobble up homes and increase competition for individuals and families looking to buy homes. The typical home price across the country has climbed 50 per cent over the past two years and real estate investors have come under scrutiny for their role in ramping up competition and driving up prices.

But Blackstone’s head of real estate Americas, Nadeem Meghji, said that is not in the cards for the company’s Canadian expansion.

“It’s just not an area that we are focused on in Canada,” he said in a joint interview with Janice Lin, the new head of Blackstone Canada.

The New York-based company, which has US$915.5-billion in assets under management, has been accused of profiting off the 2007 U.S. housing meltdown after it bought swaths of distressed properties and then rented them out to U.S. residents.

Blackstone has said it did not own any single-family homes before the crisis and didn’t foreclose on any of the properties. It has also said many of its purchases were homes that had been sitting vacant and dragging down local property values.

Blackstone has since sold that business and owns a rent-to-own business called Home Partners of America – one of the many players in a growing single-family home rental market in the U.S.

“We don’t have a similar platform in Canada and we don’t have the intention of launching one because, from our perspective, we think there are just more interesting places to deploy capital in the Canadian market,” Mr. Meghji said.

Ms. Lin, a former Canada Pension Plan Investment Board executive, is in charge of Blackstone’s expansion in Canada. She cited the country’s favourable immigration policies and its strong population growth as two key factors that make Canada a winner for Blackstone’s capital.

Blackstone mostly owns warehouses and other industrial space in Canada, as well as a couple of office towers. It also has some investments in apartment building developments. All together, they are worth about US$14-billion, according to Blackstone, representing just a tiny fraction of the company’s global real estate portfolio.

Ms. Lin and Mr. Meghji both said the company will continue to invest in industrial and top office buildings, as well as hotels.

Blackstone has previously said it expects its growth here will be significant. Mr. Meghji would not quantify “significant” except to say he expects growth will be material and Canada could eventually command a larger share of Blackstone’s global real estate portfolio.