Rising interest rates in 2022 made a star out of a type of exchange-traded fund that lived in the shadows for most of the past decade.

Cash-equivalent ETFs, also called high-interest savings ETFs, ended the year with after-fee yields of about 4.6 per cent and a very comfortable risk profile for investors unnerved by the damage done to both stocks and bonds in 2022. This explains why the two ETFs with the highest inflows of money in the first 11 months of the year were cash-equivalent funds, as were the eighth and 15th best sellers.

Expect to see these ETFs remain in favour with investors until we see a convincing, sustained rally for stocks. Truth be told, a lot of investors will be too late in moving money from cash into the market. But at least they’ll earn an acceptable rate of return on their cash, if they balance both risk and reward.

There’s growing speculation that the Bank of Canada could start cutting rates by the end of next year. For now, though, investors have a low-risk place to sit while waiting for more clarity from stocks and bonds.

Assets in cash-equivalent ETFs are held in bank savings accounts paying more interest than retail customers get. The money isn’t protected by deposit insurance, just the stability of our biggest banks.

Two downsides to cash-equivalent ETFs: Some online brokers charge as much as $9.99 to buy and sell them, and a trio of bank-owned brokers don’t allow clients to buy them at all. The three are BMO InvestorLine, RBC Direct Investing and TD Direct Investing.

Imagine how much bigger cash-equivalent ETFs would be if these three big bank-owned brokers didn’t give the impression that they put themselves ahead of clients.

Are you a young Canadian with money on your mind? To set yourself up for success and steer clear of costly mistakes, listen to our award-winning Stress Test podcast.

Chart of the Day: ExxonMobil Aims for $95

Predictions for the housing market, lower internet costs and stable stocks: Must-read business and investing stories – The Globe and Mail

Getting caught up on a week that got away? Here’s your weekly digest of The Globe and Mail’s most essential business and investing stories, with insights and analysis from the pros, stock tips, portfolio strategies and more.

The Bank of Canada this week increased interest rates for the eighth consecutive time but said that it expects to hold off on further hikes to “assess whether monetary policy is sufficiently restrictive to bring inflation back to the 2-per-cent target.” As Mark Rendell reports, the central bank raised its benchmark rate by a quarter of a percentage point, bringing the policy rate to 4.5 per cent, the highest level since 2007. With borrowing costs and mortgage rates at their highest level in years, many potential homebuyers have been shut out of the real estate market, writes Rachelle Younglai. The typical home price across the country is already down 13 per cent from its peak last February amid the bank’s attempts to rein in runaway inflation by reducing access to cheap loans. As such, the bank is predicting home prices will decline further before sales pick up later in the year.

Rising interest rates were the main contributor to the woes of the stock markets in 2022. Interest-sensitive securities such as REITs, utilities, telecoms and bonds all tumbled as rates steadily increased. Combined with the collapse of tech stocks as the economy that benefited from pandemic lockdowns dissipated, we ended up with all the major stock markets in the red, and the Canadian bond market experiencing its worst loss in four decades. But there were some inflation-beaters. Gordon Pape looks at a number of inflation-beating securities that thrived in a rising price environment and are still doing well, although momentum is slowing.

When assessing inflation, central bankers and economists will often exclude food and energy costs, but in a recent report, Karyne Charbonneau, executive director of economics at CIBC Capital Markets, said the Bank of Canada should consider the rapid climb in mortgage interest costs “when judging the underlying inflationary trend.” As Matt Lundy writes, while the bank is raising interest rates to cool demand and tamp down inflation, its efforts are having the opposite effect on mortgage payments, which have jumped 18 per cent in the past year. Although mortgages carry only 3-per-cent weight in how the Consumer Price Index is calculated, the increase is substantial enough that mortgages are now the largest contributor to annual inflation.

Could lower cellphone and internet costs be coming?

Lowering cellphone and internet bills is a top priority for Vicky Eatrides, the new chair of Canada’s broadcast and telecommunications regulator, Irene Galea reports. Unfortunately, Ms. Eatrides is inheriting a commission that is widely seen as slow to make decisions. The continuing legal proceedings of Rogers Communications Inc.’s takeover of Shaw Communications Inc. are attracting unprecedented attention to the inner workings of the telecom industry and the future of cellular service competition in Canada. Meanwhile, two CTRC policies, concerning industry rates for broadband and wireless networks, finalized during the previous chair’s term, are still being debated among industry players. Ms. Eatrides would not reveal specifics related to her plan to lower cellphone and internet costs, but added she hopes to speed up the commission’s decision-making process.

The real savings of owning an electric vehicle

With gas prices yo-yoing this past year, are the savings associated with the lower operating costs of purchasing an electric vehicle ultimately worth it? David Berman, a Hyundai Ioniq 5 owner, compares charging costs for EVs to gas-powered vehicle costs over the same travelling distance. “I’ve driven almost 10,000 kilometres – did I mention that I don’t drive much?” he writes. “I’ve saved about $780 over the past year. Over 10 years, these savings would rise, theoretically, to a total of $7,800.” Additionally, he got a $5,000 federal EV rebate when purchasing the car in Ontario in early 2022, whittling down the nearly $50,000 list price for his vehicle to about $37,200 compared with a hypothetical gas-burning version of itself.

There are fewer apartments available to rent in Canada than at any time since 2001, according to Canada Mortgage and Housing Corp’s annual rental report released this week. As Rachelle Younglai reports, the country’s apartment vacancy rate dropped to 1.9 per cent in 2022 – down from 3.1 the year before and the lowest level in more than two decades – owing to higher net migration, the return of postsecondary students to the campus and the spike in borrowing costs. The country’s largest rental markets were under particular stress, with Toronto’s apartment vacancy rate dropping to 1.7 per cent last year from 4.4 per cent in 2021, Montreal to 2.3 per cent from 3.7 per cent and Vancouver to 0.9 per cent from 1.2 per cent. The national average monthly rental price for a two-bedroom rose 5.6 per cent to $1,258 last year, with Vancouver and Toronto commanding the highest rents at an average of $2,002 and $1,765 monthly.

Now that you’re all caught up, prepare for the week ahead with the Globe’s investing calendar.

3 reasons dividend stocks can lead the next bull market

After a bull market like the one we experienced prior to 2022, it can be tempting to stick to the same investment strategies that have been working. But the underlying economic factors are set to be materially different in the coming years, which means the market is likely to look very different from what we’ve seen in the past 10-plus years.

This sets the stage for a market that grinds higher, led by large, profitable, dividend-paying companies. Here are three reasons dividend stocks can lead the next bull market.

Dividends may make up a larger portion of the total return

If inflation remains high, it will be very difficult for the market to grow via multiple expansion as it has during the past 10 years. This opens the door to dividends regressing to the long-term mean and making up a larger percentage of the total return than it has recently.

Valuations are attractive for dividend stocks

This is common during a bear market like the one we experienced last year. The good is thrown out with the bad, as companies with consistent earnings are sold off with the same urgency as less profitable companies. This creates an opportunity that can be identified by using the P/E ratio.

Great companies with robust business models and long histories of profitability rarely go on sale, so this can be a great opportunity to add quality names to a portfolio.

Despite the potential for market turbulence in the near term, dividend stocks remain a good option for investors looking to weather any upcoming volatility and maximize their returns over the long term.

Remember that investing in the stock market carries risks and a professional investment adviser can help assess your investment goals and risk tolerance and develop a personalized investment strategy tailored to your specific needs and circumstances. 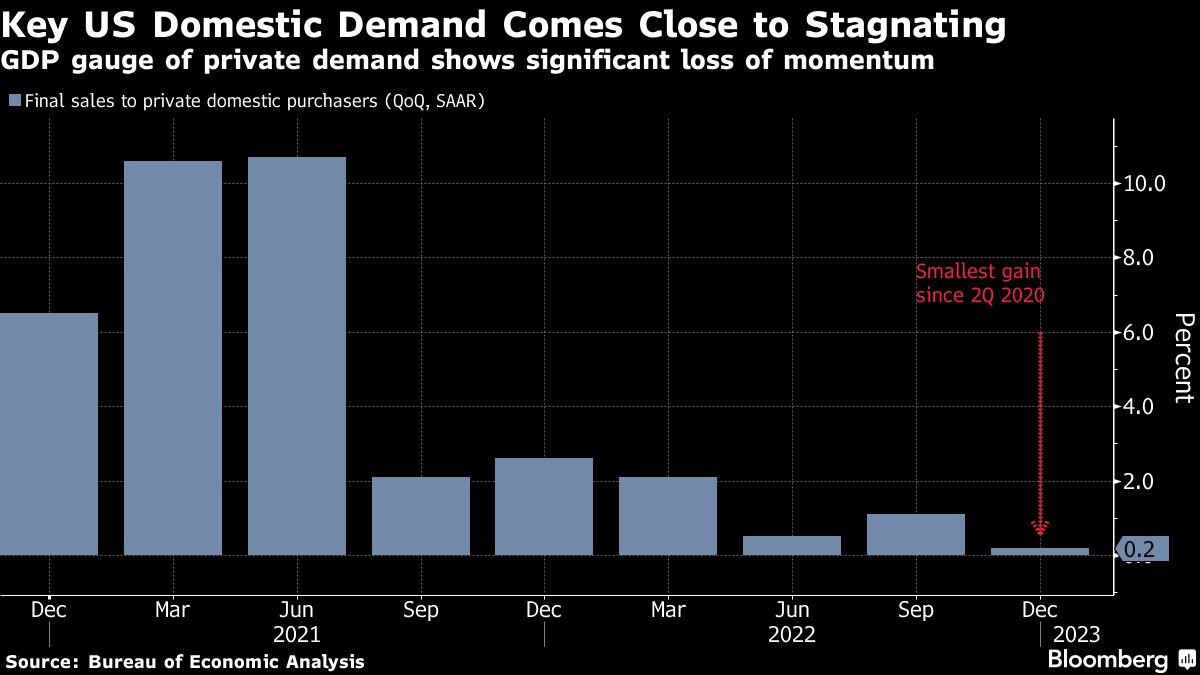 (Bloomberg) — US manufacturing showed more signs this week of succumbing to the Federal Reserve’s aggressive interest-rate hikes that are taking a bigger bite out of demand and risk upending the economic expansion.

The government’s first estimate of gross domestic product for the fourth quarter and a report on December factory orders for durable goods pointed to sizable downshifts in both spending on business equipment and bookings for core capital goods.

The durable goods report Thursday showed orders for nondefense capital goods excluding aircraft — a proxy for business investment — dropped 0.2% in December after no change a month earlier. Over the fourth quarter, bookings for these core capital goods posted the weakest annualized gain since 2020. Shipments, an input for GDP, decreased for the third time in four months.

“Taken in tandem with the output data where industrial production has declined in six of the past eight months, it is increasingly evident that the manufacturing recession is well underway,” Wells Fargo & Co. economists Tim Quinlan and Shannon Seery said in a note to clients.

Also on Thursday, the GDP report showed outlays for business equipment dropped an annualized 3.7%, the largest slide since the immediate aftermath of the pandemic. That decline was part of a broader demand slowdown, which included a smaller-than-forecast advance in personal spending.

While GDP growth beat expectations, details of the report that offer a clearer picture of domestic demand were decidedly weak. Inflation-adjusted final sales to private domestic purchasers, which strip out inventories and net exports while excluding government spending, rose at a paltry 0.2% rate — also the weakest since the second quarter of 2020.

The slump in housing is also spilling over into producers of non-durable goods. Shares of Sherwin-Williams Co. tumbled this week after the paintmaker pointed to pressures stemming from a weak residential real estate market and inflation.

“We currently see a very challenging demand environment in 2023 and visibility beyond our first half is limited,” Chief Executive Officer John Morikis said on a Jan. 26 earnings call. “The Fed has also been quite clear about its intention to slow down demand in its effort to tame inflation.”

An accumulation of inventories only adds to the headwinds. Inventory building accounted for about half of the 2.9% annualized increase in fourth-quarter GDP. For the year as a whole, inventories grew $123.3 billion, the most since 2015.

With demand moderating, there’s less incentive to ramp up orders or production as companies make greater efforts to sell from existing stock.

In addition to the aforementioned data, the latest surveys of manufacturers show sustained weakness. Measures of orders at factories in four regional Fed surveys have all indicated multiple months of contraction.

All surveys released so far for this month are consistent with an overall contraction in activity that extends back through most of the second half of 2022.

Next week, the Institute for Supply Management will issue its January manufacturing survey and economists project a third-straight month of shrinking activity.