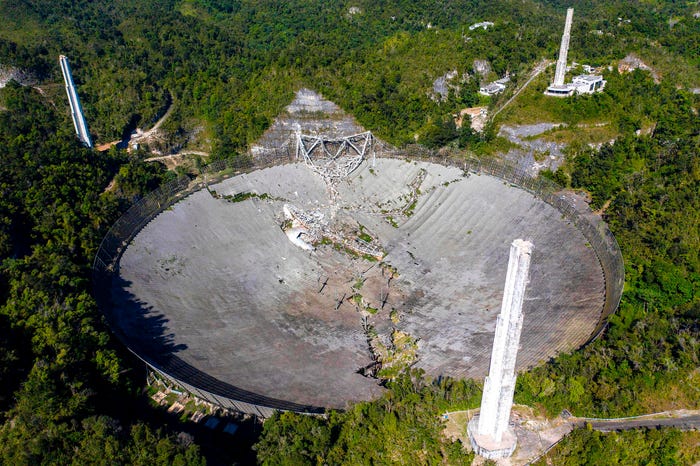 The second-largest radio telescope in the world collapsed on Tuesday morning.

The Arecibo Observatory’s 900-ton platform, which sent and received radio waves and was suspended 450 feet in the air, crashed into the 1,000-foot-wide disk below. When it fell, it pulled down with the tops of three surrounding support towers.

Videos of the crash show that it began when cables that connected the hanging platform to one of the towers snapped. Previously, an auxiliary cable on that same tower broke in August, then one of its main cables broke in November. Since then, the National Science Foundation, which owns Arecibo, had been rushing to disassemble the telescope, since it was clear a complete collapse was possible.

But the platform fell before engineers made much headway in the deconstruction process.

Jonathan Friedman, who has been part of the Arecibo Observatory’s scientific staff since 1993, told local news outlet NotiCentro the collapse sounded like the rumble of an earthquake, a train, or an avalanche.

The video below, captured from a nearby control tower, shows the platform falling at 7:54 a.m. local time. A cable takes out the catwalk that allowed engineers to access the platform. The top of the tower where the cables broke, visible in the background, then falls. Then the top of another broken tower comes rolling down the hillside on the left.

“As you can see, this was a very violent and kind of unpredictable failure,” Ashley Zauderer, NSF program manager for the Arecibo Observatory, said in a briefing on Thursday.

In a separate video, drone footage shows the cables snapping and the resulting crash from above. The drone happened to be doing reconnaissance over the telescope’s platform at that moment, since drone surveillance was a key source of information for engineers trying to figure out how to deconstruct the telescope. Due to the known risk of collapse, nobody had been allowed to approach the unstable structure since the fateful cable break in mid-November.

The vicinity around the dish and the three towers had been cordoned off, so nobody was injured in the collapse, the NSF said.

Arecibo’s downward spiral began in August, when a 3-inch-thick auxiliary cable popped out of its socket on one of the telescope’s three towers and crashed into the dish. It tore a 100-foot gash in the panels.

Then the second failure, a snapped main cable, surprised the telescope’s managers in November. An engineering assessment afterward found that the remaining cables were liable to break at any time and send the platform tumbling.

Since the structure was too unstable to save without risk of it collapsing on technicians while they worked on the repairs, the NSF decided to say goodbye to Arecibo, decommissioning the world’s most iconic radio telescope.

A blow to the search for alien life

In its 57 years of operation, Arecibo hunted for hazardous near-Earth asteroids, searched for signs of alien life, and discovered the first planet beyond our solar system.

In 1974, Arecibo beamed the most powerful broadcast Earth has ever sent to communicate with potential aliens. In 2016, it detected the first repeating fast radio bursts: mysterious space signals that scientists now think come from dead stars.

Arecibo’s massive dish antennae, built into a depression on the Puerto Rican jungle floor, reflected radio waves from space to its suspended platform.

Abel Mendez, director of the Planetary Habitability Laboratory at the University of Puerto Rico at Arecibo, said the loss of the telescope is a major blow to humanity’s search for radio waves sent by other lifeforms. That’s because Arecibo and China’s Five-hundred-meter Aperture Spherical Radio Telescope (FAST) were Earth’s “two big eyes” in radio astronomy.

“If you lose Arecibo, then you lose the ability to monitor — 24 hours a day — a faint source of radio signals,” Mendez told Business Insider before the collapse, adding, “if you are monitoring a source of interest which is in the weak radio spectrum, you need two big radio telescopes: one pointing toward something during the day and the other through the nighttime.”

Other National Science Foundation facilities — the National Radio Astronomy Observatory in Virginia and the Green Bank Observatory in West Virginia — could take on some of Arecibo’s data collection, but they’re not as sensitive to weak radio signals as Arecibo was.


Also in this package

Cape Canaveral, Florida: The first private space station crew was introduced Tuesday: Three men who are each paying $55 million to fly on a SpaceX rocket.

They’ll be led by a former NASA astronaut now working for Axiom Space, the Houston company that arranged the trip for next January.

“This is the first private flight to the International Space Station. It’s never been done before,” said Axiom’s chief executive and president Mike Suffredini, a former space station program manager for NASA.

While mission commander Michael Lopez-Alegria is well known in space circles, “the other three guys are just people who want to be able to go to space, and we’re providing that opportunity,” Suffredini told The Associated Press.

The first crew will spend eight days at the space station, and will take one or two days to get there aboard a SpaceX Dragon capsule following liftoff from Cape Canaveral.

Russia has been in the off-the-planet tourism business for years, selling rides to the International Space Station since 2001. Other space companies like Richard Branson’s Virgin Galactic and Jeff Bezos’ Blue Origin plan to take paying customers on up-and-down flights lasting just minutes. These trips _ much more affordable with seats going for hundreds of thousands versus millions _ could kick off this year.

“These guys are all very involved and doing it for kind of for the betterment of their communities and countries, and so we couldn’t be happier with this makeup of the first crew because of their drive and their interest,” Suffredini said.

Each of these first paying customers intends to perform science research in orbit, he said, along with educational outreach.

Lopez-Alegria, a former space station resident and spacewalking leader, called the group a “collection of pioneers.”

Tom Cruise was mentioned last year as a potential crew member” NASA top officials confirmed he was interested in filming a movie at the space station. There was no word Tuesday on whether Cruise will catch the next Axiom flight. Suffredini declined to comment.

Each of the private astronauts had to pass medical tests and will get 15 weeks of training, according to Suffredini. The 70-year-old Connor will become the second-oldest person to fly in space, after John Glenn’s shuttle flight in 1998 at age 77. He’ll also serve under Lopez-Alegria as the capsule pilot.

Axiom plans about two private missions a year to the space station. It also is working to launch its own live-in compartments to the station beginning in 2024. This section would be detached from the station once it’s retired by NASA and the international partners, and become its own private outpost.

The founding director of Vital Capital Fund, Eytan Stibbe, is one of the four people that will be going on the first-ever entirely private mission to the International Space Station (ISS). Stibbe has been investing in Africa for the past 26 years.

The Ax-1 is expected to launch as soon as January 2022, using a SpaceX Crew Dragon. Axiom said Ax-1 is its first “precursor” private astronaut missions to the ISS—subject to approval from NASA and its international partners. It is also working NASA are working on the final approval for a formal Basic Ordering Agreement (BOA) to enable private astronaut missions, with further discussions underway to agree on and authorise the Ax-1 mission profile.

The Ax-1 mission, which is to a Low Earth Orbit destination (LEO), would allow the four-man crew to carry out research and philanthropic projects for eight days. According to NASA’s 2019 pricing policy on private astronaut flights to the ISS, each night costs $35,000 per person. This cost includes $11,250 to use life support system and toilet, $22,500 for other necessary supplies like food, air, and medical supplies.

Each member of the first private crew, however, is paying $55 million. This ticket price includes “any and all necessary costs”, an Axiom spokesperson told The Verge.

“We sought to put together a crew for this historic mission that had demonstrated a lifelong commitment to improving the lives of the people on Earth, and I’m glad to say we’ve done that with this group”, Axiom Space President and CEO Michael Suffredini said. “This is just the first of several Axiom Space crews whose private missions to the International Space Station will truly inaugurate expansive future for humans in space—and make a meaningful difference in the world”. According to the statement by Axiom, Stibbe plans to conduct scientific experiments of Israeli researchers and entrepreneurs coordinated by the Ramon Foundation and the Israel Space Agency at the Ministry of Science and Technology. He will also undertake educational activities from orbit to inspire Israeli children, youth, and educators.

Stibbe is a board member of the Centre for African Studies at Ben-Gurion University and other non-governmental organisations dedicated to education, art and culture.

Pathy will be the 11th Canadian astronaut going into the orbit. He is collaborating with the Canadian Space Agency as well as the Montreal Children’s Hospital, who are helping to identify health-related research projects that could be undertaken during the mission.

Connor will collaborate with Mayo Clinic and Cleaveland Clinic on research projects. He also intends to provide instructional lessons to students at Dayton Early College Academic in his hometown of Dayton, Ohio.

“This collection of pioneers—the first space crew of its kind—represents a defining moment in humanity’s eternal pursuit of exploration and progress”, López-Alegría said. “I know from firsthand experience that what humans encounter in space is profound and propels them to make more meaningful contributions on returning to Earth. And as much as any astronauts who have come before them, the members of this crew have accomplished the sorts of things in life that equip them to accept that responsibility, act on that revelation, and make a truly global impact”.

SpaceX launches 143 spacecraft, a record for a single launch – SatelliteProME.com

The rocket ferried 133 commercial and government spacecraft, as well as 10 Starlink satellites.

SpaceX has launched a batch of 143 spacecraft into space under the company’s new cost-cutting SmallSat Rideshare Programme, breaking the record for the most satellites deployed on a single mission. The Falcon 9 rocket lifted off from the Space Launch Complex 40 at Cape Canaveral Space Force Station in Florida at 10 a.m. EST.

A collection of 143 satellites as part of SpaceX’s first dedicated rideshare mission over the experienced launcher, is called Transporter-1.

The rocket ferried 133 commercial and government spacecraft. SpaceX, acting like a cosmic carpool, dispatched its own 10 satellites into space Starlink Internet Satellites. Flat-panelled Starlink satellites are expected to be deposited in a unique polar orbit – a first for the broadband fleet, which will serve customers in Alaska and other polar regions.

The launch carried payloads for Planet, Swarm Technologies, Kepler Communications, Spire, Capella Space, ICEYE, NASA, and a host of other customers from 11 countries. The payloads ranged in size from CubeSats to microsatellites weighing several hundred pounds.